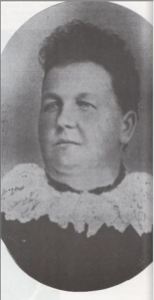 Family knowledge of my direct maternal line only takes us back to about 1857.  This was the birth of Fanny Fox, a child who can be found in Hanwell Orphanage, London by 1861 aged three.  Ten years later, Fanny travelled apparently alone to Australia to become a domestic servant.  We have her shipping record. Eight years after her arrival, Fanny married William Morey in Albury on the New South Wales/Victoria border.  One of their daughters was my great grandmother.

I did hope for a miracle when I tested my MtDNA.  Maybe, I thought, Fanny’s mother or grandmother had sisters, and maybe their descendants might have tested their MtDNA and we’ll be a match!

Because Fanny was in an orphanage in London, we assume she was born in that city.  There were several of the same name at the time, and most grew up in secure families.  The birth indexes via subscription sites don’t match a name with parent names – not that parent names would necessarily help – and I am slowly purchasing the birth certificates of all the Fanny Fox’s in England, as funds allow.  It would have been nice to find some Fox ancestors amongst my family finder matches’ trees, but this hasn’t happened either.

London was a cosmopolitan place in the 1850s.  People came from everywhere.  There is no guarantee that Fanny was even born in England.  If her parents had arrived on an immigrant ship from .. say Germany or Prussia … what would then happen to a three year old girl if her parents died?  English may not even have been her first language.   She could equally have come from Ireland where the surname Fox is quite common.

In the 1850s in London there were many problems with cholera, diphtheria and tuberculosis.  Perhaps Fanny’s origins were a damp tenement along the Thames where the non-English crowded together to survive.  Perhaps her parents were fully employed tradesmen who were struck down where they had no family.  Perhaps her mother was single and fled to the city to have her child where her family would not be shamed.  There are so many possibilities.

The 1861 census recorded no birthplace for any of the orphans.  It would have taken many hours, the place was huge.  We have no clues there.  The shipping record gave us nothing.  Her marriage certificate says that her mother was Fanny Rice and her father was Unknown Fox.  If this is true then I think it implies that her mother or someone who knew her mother took her to the orphanage and her father was nowhere around.  However, we don’t know if it was true or not.  Fanny might have been told this incorrectly. Or out of a desire for a family story, she could have made it up.

Fanny’s death registration is equally lacking.  Her son was the informant and all he knew was what Fanny had told him.

An MtDNA mutation can occur at any stage – there might be two within a hundred year period, or there might be none for two thousand years.  All we can deduce is that those of a greater genetic distance probably connect further back.  This may not be the case.  I could have a common ancestress in say 1700 with no mutations in the line and so might one of my matches – giving generation zero.  But my own great aunt – sister to my maternal grandmother – might have a daughter with a mutation.  That daughter (my mother’s cousin) would be a genetic distance of one whereas the distant cousin with MRCA in 1700 might be genetic distance of zero.  This can happen.

Genetic distance of zero= everything is identical.  Were I to test my mother and my daughter, the chances are good that we’d be genetic distance zero.  Of course, we just might not if a new mutation began with me.  If the test were not so expensive I would have asked my mother to do the test.

Genetic distance of one= there is one mutational difference but still pretty close.  It might still be within the last 50 years but is just as likely to be up to a thousand years ago.

I hoped to glean some clues from my matches’ ancestry so I contacted them.  Some replied, some didn’t.  From the ones who replied, I compiled trees for their earliest known direct maternal ancestor.  I then researched those trees to see if I could take them back further. 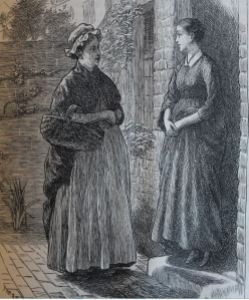 From Good Words 1864 from an engraving by P Grenier

Bridget Nangle was born in 1835 in Ireland and emigrated to the United States.  Given her birthplace, she seemed quite promising as a close relation but in my match list she does not appear as a close match.

Mrs Susannah Sealey lived and died in Pasquotank in North Carolina and was married to Philip Sealey.  There’s a nice bit of detail about her life and I even found her will, but no clues about her maiden name or her origins.   The United States is quite famous for its courthouse fires, and Pasquotank’s courthouse burned down in 1862.

Hannah Owens was born in 1735 in Virginia and seems to have lived there all her life.  Hannah married Benjamin Landreth and had several children.  According to many trees, Hannah and Benjamin were married in Patrick in Virginia in 1758.  But according to sites such as Wikipedia and Familysearch, Patrick was named after Governor Patrick Henry and was founded in 1790 – a lot of years later than her marriage.

Whatever the truth is, her dates of birth, marriage and death hold up and everything agrees with Virginia.  This brings the prospect of a common ancestress back before 1730 but it could be back in the Roman Empire for all I know.

Perhaps the closer matches would give more clues?

Virginia.  Colonial home of so many of my distant matches. Image from Pixabay.com

Elizabeth Porter was born in 1809 in Virginia.  A trend begins to be apparent.  All of these women have connections to either North Carolina, Virginia or Tennessee.  I don’t know any more about Elizabeth than this.

Sara Franklin – also known as Sophia Franklin – was born in 1784.  She married Mansfield Husbands who was born in North Carolina and they ended their days in Tennessee.  Still in the same region here.

Charlotte Miller was born in about 1757 and lived in Greenville, Greene, Tennessee.  It is not known whether she was born here. She married John Henderson.

Judith Sloane was born in 1646 in Henrico County.  We are back in Virginia.  Judith married Peter Field.

Judith was born in 1646 and her direct descendant is a genetic distance of 2 from myself.  We need a lot more people to test in this haplogroup before we learn the exact path because we don’t know where the mutations occurred.  For all I know, one of Judith’s descendants might have returned to England and she might be my direct ancestress, with the mutations occurring after that.  What is more likely is that even in 1646, our two branches were already at that genetic distance.

What is extremely likely is that the four women above are very closely related to each other.  If their descendants can deduce their common ancestry, it might help me.  I’ll keep compiling my records on these women to see what I can deduce.

These are early days yet and we are probably years away from solving this puzzle.  Luckily, I’m quite patient.  In the meantime, I’ll keep purchasing those certificates from England.