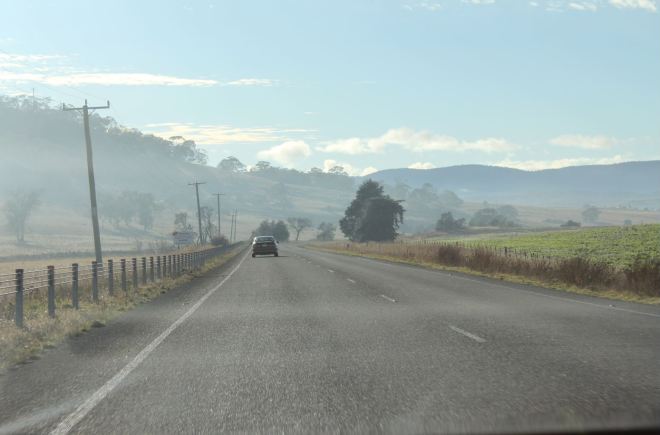 The Midlands Highway between Pontville and Kempton.

This picture was taken through the windscreen of a car on a very chilly and sunny morning. It is, however, the only picture I have of this location so near to Broadmarsh.  The hills and plains show the terrain. Black Brush Rd comes off the Midlands Highway at Mangalore to the west and after ten kilometres one reaches Broadmarsh.  Most of the road is unsealed and narrow. There are very few places to stop a car for a photograph.  Although unsealed, urban sprawl has changed its character. This is now Hobart commuter distance with very few old structures in sight and very few old trees.  The waterholes are square and bulldozed, the fences are modern and the culverts are concrete rather than stone.

Robert and Mary Brown lived somewhere here. They began further west in Hamilton, then moved to Broadmarsh. I’ve found very few references in any record set. Robert was a labourer and we know he drove dray carts because this was how his accident happened. Presumably he worked for someone as there is no record suggesting he owned his own land. He was originally a convict, born in Cambridgeshire and transported on the Tortoise for stealing. He has no record of reoffense in Tasmania. He was probably at least fifteen years older than Mary.

How did he meet her?  This is such a worthwhile question to ask about any couple and the answer always provides useful information.  If she was born in Tasmania as she said, they met after his transportation.  Their first child was born in Hamilton so there is a good chance that is where they met.

What was Mary doing in Hamilton in 1855, aged around fifteen?  By the 1890s railway had opened up the region and single girls could come in for work, but not in 1856.  If they met in Hamilton, she must have been there with family.

Robert Brown Junior was born in October. They may have met in January or February of that year at the latest.  So the logical next question is, what other Morgan families were in Hamilton at the same time?

Well, there was this one:

Hugh Morgan born 23rd July 1856 in Hamilton, the son of John Morgan and Eliza Watts.  It might be recalled from my last blog that Hugh was the witness at the wedding of his brother Thomas Morgan and Margaret Edgerton, whose child was born at Sugar-loaf Tier in 1878 very close to Robert and Mary’s granddaughter.

It was definitely time to investigate this family. Back to the map.

Hamilton is in the far south west corner of Region 13.  Bothwell is to the north, also on that borderline between Region 12 and Region 13.  Halfway between those two towns is a locality known as Hollow Tree, and the road which directly connects Hamilton to Bothwell is Hollow Tree Road. Not to be confused with an earlier Hollow Tree later renamed Cambridge.  Lots of people were born in our Hollow Tree without registration.  This was definitely the stamping ground of both my Brown family and the John Morgan family. They lived in the mountainous Ouse region and as far east as Kempton, as far south as Broadmarsh (eventually moving in to New Norfolk) and as far north as Bothwell.

The marriage of John Morgan and Eliza Watts in 1850:

Marriage of John Morgan and Eliza Watts via linctas.ent.sirsidynix.net.au/

The ages of this couple interested me.  In that era it was very odd for a woman to reach her thirties without marrying. It meant that both John and Eliza were old enough to be Mary’s parents.  They could indeed have had a daughter ten years earlier. Even more likely, Eliza was a single mother with a daughter who took her stepfather’s name after 1850.

I then found several children born to John and Eliza before the marriage occurred.  After much researching, I have come up with the following possible family:

Children of John Morgan and Eliza Watts, extrapolated from various records including birth, death and marriage.

This is a large family, but not impossibly large. Most were born at Hollow Tree and registered in Hamilton.

I still see problems with this family group. One is with the names.  Where a child died, the next child of the same sex was given that name.  This was a common practice. But along with this common practice is the one of naming a child for their father.  Why, I ask myself, is there no John Morgan among the children? Is there yet another child born 1836? There are other women in my tree with fourteen or fifteen children, but they lived in more civilized places than Hollow Tree in Tasmania.

John Morgan is also a mystery. Who was he and where did he come from?  I thought I’d found him in the convict John Morgan transported from Ireland on the Tortoise.  It would make so much sense if he came out on the same ship with Robert Brown, because the convicts certainly did form friendships as close or closer than family connections. It would explain exactly how Robert met Mary. That John Morgan received his conditional pardon in 1849, leaving him free to marry Eliza in 1850 without needing to seek permission. That John Morgan then made several trips to Victoria, one a year, and returned each time to Tasmania so we know he was still around. It all seems to fit nicely.

But it doesn’t explain so many children born before 1842 when the Tortoise arrived, unless the first Hugh, Mary and Eliza had a different father.  This is of course possible.  But if so, then why don’t we have a son called John?

Or did the male baby born 1844 actually live and was named John?  If he was the first biological child of John Morgan it would make a lot of sense.

Questions and more questions … and still no answers. Such is the way with family history.