This is the only picture I have from Ouse.  The rest of my roll of film was used on gravestones. Ouse is a lovely little town, 15km west of Hamilton, 25km west of Hollow Tree, 20km south of Osterley . If you come from the United States or Europe, you would never call Ouse a town. Maybe you wouldn’t even call it a village.  In 2011 it had a population of 368 and this has been shrinking steadily for many years.  I remember when the population was over a thousand, before some essential local employers shut up shop.  Hamilton’s population is about the same. In 1830 according to several web pages of indeterminate origins the population of Hamilton was 700. As was the way, this is not counting Indigenous communities. The census was taken to inform the administration how many people it had to look after and where they were, and indigenous people were not on the list.  It would be very interesting to know what the true population of the region was.

The climate is very clear from the above picture.  Plenty of rain and mist, cold winters and cool summers. It’s a beautiful spot with productive soil.  If equipped with a good insulated raincoat and waterproof boots it is a very inspiring place to visit. On the day I took the above photograph it snowed, but I’d used up my reel of film before the snow started falling.

Family history works best if the area where the family lived is understood.  I make a distinction between genealogy (researching names, dates, places and family statistics) and family history, which to me includes stories, characters and mementoes.  Genealogy is strictly factual and if a fact is uncertain it is generally omitted till verified. Family history, while still emphasizing truth, allows for interpretation and incorporates mysteries, emotions and memories.

The distinction between genealogy and family history is hotly debated, but that’s a whole article in itself. The point here is that family history involves whole communities. You cannot take an individual or nuclear family unit and build a picture of them without understanding their world. When they and their world are known, predictions can be made as to where missing details might be found.

Which is why this blog post is focusing on Ouse and Hamilton, two nearby towns in one dynamic community with few early records where some of my family lived.

By 1830, the administration in Hobart Town was under orders to open inland Van Diemen’s Land for colonization.

It’s well recognised that Tasmania had a thriving indigenous population when white settlers arrived.  Interactions were complicated. In some cases there was peace, in others there was conflict.  It all ended badly.  There were at least a few companies of a regiment regularly stationed at Hamilton for the protection of the settlers against indigenous attack, bushrangers and escaped convicts.

In the 1830’s there were skirmishes and misunderstandings. The individual story is bound to include elements of the whole strata from friendship to enmity. Friendships certainly did exist between indigenous people and incomers right across Australia.  Unfortunately there was not enough of it and they existed mostly at a domestic level rather than an official one. The white exiles – convicts and involuntary settlers – were the most likely to be peacable and they also had the least influence on their own superiors.

In the Ouse area in 1830, there are scattered incidents which helped to form the towns and local society.

From the local papers:

It is with great concern we have to record fresh instances of outrage by some of the aboriginal tribes. – On Wednesday last, a party made their appearance in hostile array at Mr Sharland‘s hut, at the Lower Clyde, which they robbed ; from thence they proceeded to Mr Triffet‘s hut, which was subjected to a similar depredation. After committing these robberies, the party made their appearance near Mr Dixon‘s, who was in his barn with three men, thrashing grain. They made their approach unperceived by those in the barn, but fortunately a servant girl in the house discovered them and gave the alarm.  Mr Dixon immediately ran towards the house, to protect his family from the expected attack , he succeeded in reaching the house, but received a spear wound before he arrived thither. The blacks, finding their scheme of surprisal frustrated, went away without attempting any fur- ther molestation. We are glad to find that the wound of Mr. Dixon is not likely to be attended with any very serious consequence. It is reported that a soldier has been speared by the natives, in the neighbourhood of Mrs. Burns‘ farm, in the same district.

Last Friday, a mob of upwards a hundred strong appeared before Mr Hooper’s hut, at the Hollow-tree Bottom, but retired without making any attack, this is the most formidable body seen for some time.

“Mr Triffet” was most likely Thomas Triffitt but may have been Thomas’ father James Triffitt.

“Mr Sharland” was possibly Dr John Frederick Sharland who arrived in 1823 and had the job of medical officer to the convicts in the Hamilton area.  He is the only Sharland I can find in the records living anywhere out there.

“Mr Dixon” may have been Robert Dixon who settled in the area with his wife Eliza, although the earliest record I have found is dated 1841.  Mrs Burns … I simply don’t know. Presumably she was a widow or maybe a live-out servant?

The brief reference to the men in the barn “thrashing grain” and the family in the house gives a tiny glimpse into life at that time.

There was a followup in October:

Capt. Wentworth will .. detach the Troops at Hamilton Township under Capt. Vicary, across the Clyde to occupy the Western bank of the Ouse. For this service every possible assistance will be afforded by the Parties formed from the Establishments of Messrs. Triffith, Sharland, Marzetti, Young, Dixon, Austin, Burn, Jameson, Shone, Risely, and any other settlers in that District,together with any men of the Field Police who may be well acquainted with that part of the country.

…. The parties of Volunteers and Ticket of Leave men, from Hobart town and its  neighbourhood, will march by New Norfolk, for the purpose of assisting Captain Wentworth’s force, in occupying the Clyde ; and they will be rendering a great service by joining that line in time to invest the Blue Hill, which will be about the 10th of October.

There is a nice bunch of local names here, and some explanation for the arrival of convicts in the area. The event itself, the driving of ‘the Natives’ from Blue Hill, is quite distressing in hindsight, but since it occurred and was a part of the history of this region it needs to be included.  It must have had impact on everyone involved. 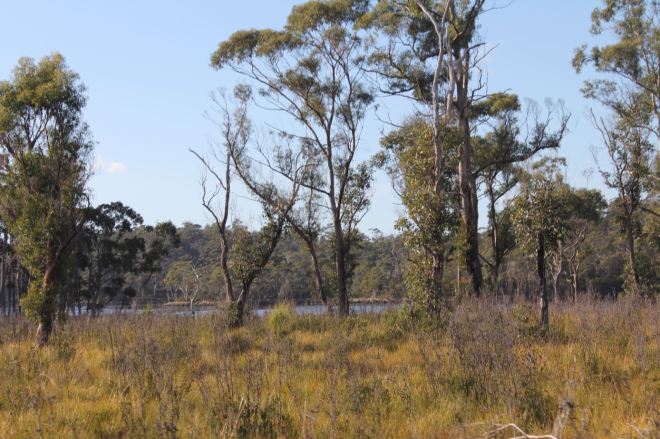 Tasmania today in the south, giving a glimpse into the unfamiliar isolation faced by the few white families in Ouse, Osterley and Hamilton in the early 19th century.

On to other aspects of life in early Ouse:

Margaret Burns was charged with stealing a China bowl, the property of Mr. John Young, of the River Ouse, with whom she had formerly lived as servant, previous to her marriage with a man named Burns. Evidence was given as to the identity of the article stolen, for Mr. Young swore positively that he had purchased it in Holland, and brought it out with him to this Colony; and Mrs. Barnes, of the Clyde, proved that she purchased it of the prisoner, who stated to her that she had brought it with her from Liverpool. It appeared that the woman had been in custody nine months on this charge, and that it was uncertain how long the stolen article had been abstracted, so that the whole proof against the prisoner rested on the fact of the bowl being traced to her possession.

Wow. Nine months in custody before coming to trial.   It’s a good thing times have changed.  Already we can see some familiar surnames appearing, and family character too. Mrs Barnes may refer to Mrs Sophia Barnes who was estranged from her husband before her 20th birthday and moved to the Ouse region with James Triffitt senior.  There might also have been others of that surname in the area, such as Mr Sharland’s daughter Ann who married William Barnes of Launceston in 1830.

And the establishment of new services continued:

It being intended to establish a Punt in the River Ouse, immediately below its juncture with Native Hut Rivulet, and likewise to form a road to it from the North Westward and from the South Eastward. -Public notice is hereby given of the measure in contemplation in order to afford an opportunity to all those who are interested, of bringing forward any well grounded objection that may’possibly exist to the adoption of that line.

Into the 1830s, locals braved floods, poisonous snakes, angry and desperate people and disease.  There were deaths and removals to safer areas.  Those who survived often thrived. Resilience and self-sustainability can be seen through the whole community.

It’s such a shame the records are so thin on the ground.