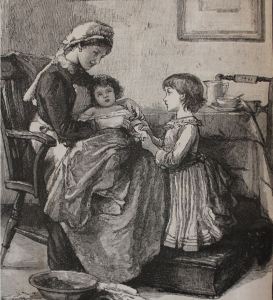 Children picture by Mary Louisa Gow from The Quiver 1885

It has been a very busy week.  My final Family Finder test came through after an unexplained delay.  I now have the lot.  I still have one spare kit and have a subject in mind, but that one will have to wait.

The final test was my daughter’s.  She was very keen to see it, and a little disappointed that I would learn nothing momentous since I have her brother, myself and all four of her grandparents.  In a way that’s true, but there were many things her test would tell me that I couldn’t be sure of.

For one thing, she was not switched at birth.  She really is my daughter.  To be honest I was in no doubt at all, but you read of hospital mixups and it’s always an outside chance.  All four expected grandparents are definitely the correct ones.  It checks out as it should.

I was pleased to see that she has an X Match with my mother.  Unlike my son who got my father’s whole X chromosome, my daughter has a mix from my father and my mother.

My son and daughter’s match in cM with close relatives

Having all tests through gave me a lot of housekeeping tasks.  I uploaded all kits to dnagedcom.com, redoing the ones already there.  I’ve started using Genome Mate so went through the kits there, importing new match data.  I’m finally free to look at the details.

All family kits with number of matches. No column for close known family so the sum of the breakdown will not quite meet the total matches.

This was an interesting exercise for me, since it helps me assess my chances of finding matches.  I’ve done the ‘Are Your Parents Related’ analysis on Gedmatch for all kits and there is no indication of a family connection.  The four members of the oldest generation here are all from completely distinct family groups.   Can it really be that simple?

It isn’t, of course.  One of my daughter’s 2nd-4th cousin matches is the same person as one of my son’s 3rd-5th cousin matches.  This person shows as a 4th-Remote cousin match for their paternal grandfather who is my father in law.  He matches this lady for a total 31cM.  My son matches her for 42cM, my daughter for 47cM.  Yet no other grandparent has her in their match list.

One of the other grandparents clearly is a match with her, but the total cM is too small for her to appear in their match list.  If this data was on Gedmatch it would be easy.  I have spoken to her via email and I’m not sure she could do it without assistance.  She struggles with emails.  Computers are a complete mystery to her.  I’ve never asked why she tested but I suspect she did it to help someone else, who has for some reason not helped her with other matches.

What else can I tell from this data?  Well,I could surmise that my mother and my aunt have some relatives who settled in the United States, probably in the Colonial era. Their match numbers outstrip everyone else’s by a long way and the US is where the bulk of tests are done.

Our X Matches of over 7cM.  Interesting that my daughter should have so many.

How, one might ask, has my daughter ended up with such a high number?  I had only six matches to pass down, and myself makes a seventh. My mother in law had only 1 plus herself.  My daughter, I’m thinking, should have a total of nine matches.  The extra matches are probably genuine and have appeared due to DNA from two sides adding up to enough for a cousin match in my daughter. Those people also share an X segment, probably from a long way back.

Now, it’s time to go see what ancestors I can confirm, and what new cousins I might have found.