For my first blog post in several months, I have decided to focus on an ancestor who just might have emerged from the shadows at last.  There is no certainty yet.  I’m making this post in case other Behan or Dillon researchers can help narrow the field at all.

I have  already written one blog post about Bridget Bain . She appeared in Tasmania in 1856 as the young bride of John Dillane. They lived in Cygnet and raised a large family. She has puzzled her descendants for a long time.

John and Bridget were married twice.  That is, they were married in 1856 in an Anglican church and conducted a second, Catholic ceremony in 1877.

In that twenty one years, the state of Tasmania underwent a huge cultural transformation. The state was self-governed as of 1856. They  ceased to be a penal settlement.  With its own parliament and a rapidly increasing free population came some pride and stability. More children went to school, infrastructure improved and there was a lot of employment for anyone who wished to work.

By 1877, priests and reverends could count their congregations as their own.  The pews were no longer filled with ticket-of-leavers who were only there as part of their curfew requirements.  True communities were developing and along with this came greater care with parish events such as baptisms and marriages.  My guess is that the details on John and Bridget’s second marriage are likely to be recorded with a level of respect to the couple which may have been absent the first time round. At this second marriage, Bridget’s name is written as ‘Behane’ not ‘Bain’.

A quick search finds four women of this name in Tasmania in the correct decade.  One was a convict who arrived in 1842 and is too old to be my three times great grandmother. Another arrived in 1857 so was not present at the time of our Bridget’s first marriage.  This leaves two options, both of them Irish girls who came out under assisted immigration scheme. Both of them are written in the shipping records as ‘Biddy Behan’.  One arrived in Dec 1854 on the William Hammond from Kildare, the other in Feb 1855 on the Fortitude from Kerry.

Both were Roman Catholic, both were 18 years of age. Neither could read or write. Each came over to be a general servant.  It is very hard to pick between them.   The girl from Kildare had ‘no friends’ and upon arrival was hired by a Mrs James.  The girl from Kerry was sponsored to the state of Tasmania by a man named Denis Sweeney.  Here lies the possible clue.

At first, I had great hopes for Biddy Behan from Kerry.  Everything fitted! John Dillane came from the Kerry/Limerick border so she might have been a girl from home.  Then I tracked Denis Sweeney and lo and behold, he was a convict transported on the Lord Dalhousie, the same ship as John Dillane!  Could it really be more conclusive?  Denis Sweeney was transported with his brother John.  They ended up in Westbury where John Sweeney married convict Ellen Behane.  Biddy Behan(e) from Kerry was the little sister of Ellen Behane.  It was perfect!

But no. Biddy Behane from Kerry was married at Westbury on 23 April 1857 to Jeremiah McAuliffe.  John and Ellen Sweeney were the witnesses.  Ten years later they were living in Oatlands.  That bird won’t fly.   But at least we have eliminated the options down to just one.  This does not mean it is definitely our Biddy, there were any number of girls arriving on ships without papers or born locally  without record.  If Bridget was easy to track, someone would have done it by now.  But this one Biddy Behan was now high on the list of possibilities.

Biddy Behan from Kildare left Plymouth on 30 Sep 1854 in the ship ‘William Hammond’ and arrived in Hobart on Christmas Day the same year.  The ‘William Hammond’ was a brand new ship. Biddy traveled on her maiden voyage with Captain Horatio Edwards. The common practice in that decade was for a ferry to bring passengers from Dublin to Plymouth where they would board the bigger ship to Australia.

Their arrival was barely noticed in Hobart. It was Christmas after all.

The William Hammond has made an excellent passage of about 84 days. Two births and four deaths took place during the passage. She spoke no vessels. (Footnote 2)

Biddy’s first days in Hobart Town are not recorded, but we know she was employed as a general servant by Mrs James of Brown River. Brown River is in Kingston  between Hobart and Cygnet (formerly Lovett), so this young girl moved to the right general area.  If John Dillane made day trips at all, he might have found her. 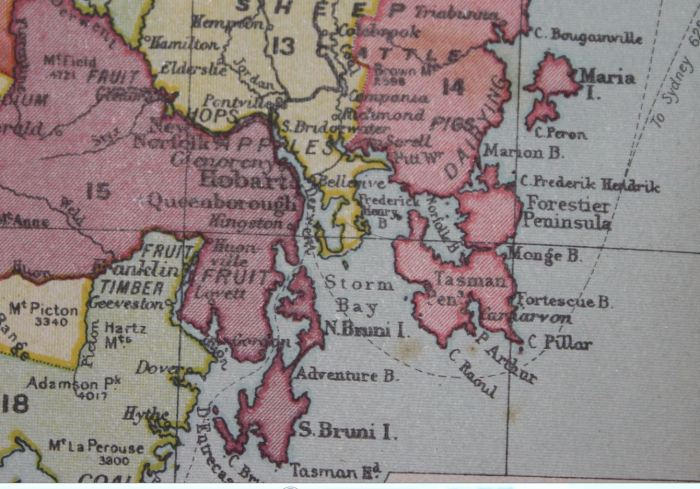 Massively enlarged portion of a map of Tasmania which my grandfather used at school.

There is no other record regarding young Biddy Behan from Kildare.  It is very very likely that this is the girl who married John Dillane nearly two years later.

A search for a family surnamed James at Brown River has so far yielded nothing.  However, there was a Frederick and Jane James living at Deep Bay in December 1856.  Deep Bay is deep in the heart of Dillane country to the east of Cygnet.  If Biddy’s employers had moved with her to Deep Bay, she would have had daily contact with John Dillane.  He might have been her neighbour!  Frederick James was sometimes recorded as Frederick Jaynes and he was a sawyer. If this family employed a servant, she was probably paid very little and undertaking some heavy work.  Once again, it makes sense for the unskilled Biddy Behan to gain this type of employment.

Searching for further clues had not yielded results.  Behan was a common name in Kildare, as is ‘Bridget’ as a girl’s first name.  We know she was Catholic from the shipping record but not every record has survived.  However, Kildare has some early baptisms so there are possibilities.

There must be a clue in here somewhere but until we locate Biddy’s family we don’t know what that clue is.

Bridget Behan baptised on 8 May 1836 age 0, the daughter of Peter Behan and Eliza Scott, in Athy, Kildare, Ireland.  Sponsors were George Scott and Mary Whelan

Two other children were born to these parents – Eliza baptized in 1837 and Thomas baptized in 1841. However, there is a marriage in 1867 in Kildare, Ireland for one Bridget Behan aged 30 with a father named Peter Behan. If this is the same Bridget, it would eliminate her as an option.

Bridget Behan baptised on 21 Nov 1841 the daughter of Patrick Behan and Mary White at Monasterevin, Kildare, Ireland. No sponsors written into this register. Although this Bridget is a few years younger, these parent names are found among John and Bridget’s children.  Patrick and Mary Behan also had a daughter Ellen baptized in 1840.  Biddy just might have put her age up to obtain passage out of Ireland.

Bridget Behan baptised on 16 Feb 1837 the daughter of Maurice Behan and Jane Conlan at Monasterevan, Kildare, Ireland. No sponsors written into this register.

Bridget Behan baptised on 13 Jan 1837 the daughter of Michael Behan and Anne in Suncroft, Kildare, Ireland.  Sponsors were Denis Haslan and Maria Nowlan

There are more – many more, but the years begin to be distant or the parent names are distinctly different to our Biddy’s family.

Having searched to this point I have once more come to a grinding halt.  No DNA matches show ancestral names of Scott or White in Kildare.  With the new changes in FtDNA I am no longer able to search for ‘Kildare’, which is a huge shame.

So I’ll leave it here for now.  New records are finding their way online all the time.  I will just have to wait.