The little township of Bethanga in north Victoria (Australia) was in its boom years when Emily Morey was born in 1887.  She was the fifth child in her family, with two elder brothers and two elder sisters.

Her proud parents were William and Fanny.  At the time of their marriage, William had been a drover and Fanny a domestic servant, but now they were settled into farm life with William taking labouring work where he could find it.  Bethanga was a mining town and in the 1880’s there was great hope of a big lode somewhere in the hills, just waiting for the right prospector to find it.  Inns, boarding houses and eating establishments lined the main street and many new homes were still popping up on the farmlands around the town.  Churches were opened and the burning issue in town in the year of Emily’s birth was the proposed site for a much needed official state school.

The topic for this week’s #52Ancestor blogging challenge is ‘Start’ and Emily (Stella) Morey was the one who got me going on what has been almost a lifetime of family research.  She was my great grandmother in a direct maternal line, known to us all as ‘Ma’. She passed away in 1984 when I was in high school.  Stella taught me through stories which brought the past to life for me that behind every dry name and date was a whole world that someone had lived.  Not only that, but when I came to research her I found that her personal story bore very little resemblance to the individual who emerged from her vital records.  It was a salutary lesson to look beyond the official account whenever possible. 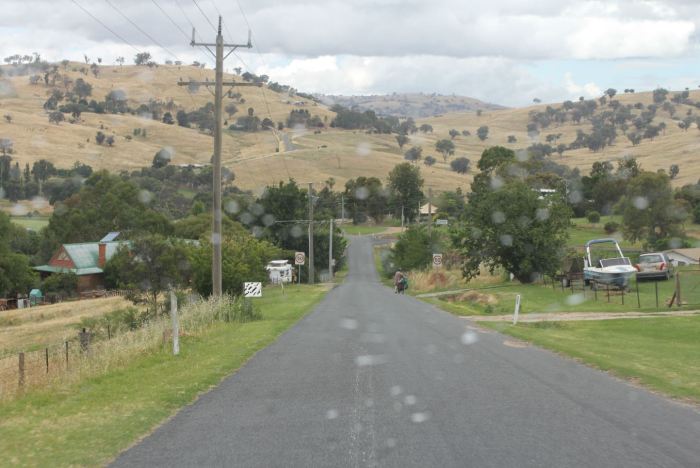 The township of Bethanga from the western approach Dec 2014

The confusion begins with her birthday.  Nobody ever knew, she told us, if she was a winter baby or a spring baby since she was born at midnight on the 31st August – or maybe it was just past midnight on the 1st September?  Through the years, both dates had been used on various official documents.  She also lost a year in age somewhere, believing herself to be born in 1888.

The official birth registration gives her a birth date of 27th August 1887, but the birth was not registered till a few days later so we can’t be completely sure.  I have placed the official date in my tree, but were she alive I suspect she would dispute this vehemently.

The next confusion is her name.  Registered and baptised as Emily, she quickly became known as Stella.  She told me that it was because she had a cousin of the same age named Emily and so one of their names had to change.  I have not yet discovered a cousin named Emily.  Another relative says she used to help care for some children and they had difficulty calling her Emily.  I only learned her true name in the first place by looking at the family bible with her.  It was never used.

Stella’s birth family did not make it into many records, but some aspects of their lifestyle can be inferred.  They moved often, but stayed in the same area, the mining and farming district which had spread out from the banks of the Murray River.  Stella’s brothers William and Charles were born in Bethanga in 1880 and 1881.  Frances was born in Granya in 1883, and Louisa was born in Lockhart in 1885.  Come 1887 and the birth of Emily (Stella), the family was back in Bethanga.

William Morey’s large birth family was nearby, so Stella probably knew many of her cousins. Her father had been born in the goldfields of New South Wales, and he knew no other home than rural Australia. Fanny, on the other hand, was an orphan from England, raised to be say her prayers, do her work diligently and to appreciate refinement enough to take a domestic position with a good family.  From all accounts she took to motherhood like a duck to water.  She loved her brood of youngsters and everyone knew her as a happy, warmhearted women.  Fanny was heavily involved in the local church and all her children attended church also.  As a child in a large family who were just one step up from itinerant, Stella was quite fortunate in having stable, healthy parents who cared about the future of all their children.  Certainly, she never perceived any lack in her own childhood.

Three more sisters were born over the next decade, named Rachel, Amy and Olive.  Stella was eleven years old when her youngest sibling was born and died within just a few weeks.  Matilda Mignonette Morey was the only child lost to William and Fanny and her death came as a shock to them all.

In the years of Stella’s childhood, Bethanga changed.  The big gamble had not paid out for either businesses or miners.  Despite some moderately successful mines, most townspeople had not become rich.  Some residents were even beginning to move away.  In 1895, the mail service was reduced from a daily delivery to one every third day.  Funds ceased to be available for local repairs.  In the late 1890s, Australia was moving into a time of financial recession and the rural towns were beginning to feel it, especially where the occupants had relied too heavily on credit.

Stella had her fourteenth birthday in 1901, Australia’s year of Federation.

Stella’s movements through her teen years are still unknown, but her parents can be found on the electoral roll in 1903, 1905 and 1906 still living in Bethanga.  The two boys, now young adults, were living at home so it is likely that the girls were there also.

Bethanga suffered a few bad setbacks at this time.

20 Aug 1904
A great crash in the mines occurred on Friday when between fifty and sixty men were dismissed without respect to persons. Married and single had to go, and things look very black for the present.
Some are gathered on one street corner, some on another, asking where they’ll go, what will they do, and so forth. Hard luck seems to stand in the way. The only thing is to keep smiling and hope for better days to come. (1)

Things did not improve in the town.

09 December 1905
BETHANGA.
from our own correspondent.
Once again we are led to believe that the unsatisfactory state of affairs existing in Bethanga at the present time will be brought to a close. The A.M. A. are now taking steps on behalf of the miners to obtain wages due to them over 12 months ago. The liquidation has now to take final steps in regard to winding up affairs.
If this had been done in the first place, who can say but that Bethanga would have by this time been on its feet again. There is one thing about the Bethanga people — they all have a large stock of hope, otherwise they — especially the business people — would have begun fishing long before the season was open. (2)

There were other problems too.  Cattle were mysteriously dying and crops were failing. These issues at first were deemed to be local farming problems but in 1907 were found to be due to serious pollution from the mines in some of the local watercourses.

Finally, sometime around 1907, the whole Morey family left town and moved north to the Snowy Mountains to make a fresh start as a share farming family in a community called Manus.

MANUS (Letters to Uncle Jeff)
14 December 1906
Dear Uncle Jeff, — Manus is a station situated on the Manus Creek, four miles from Tumbarumba, where sheep raising is still carried on. But of late the owners have gone extensively into the cheese making industry, which is now a flourishing concern. The factory, also belonging to the station, is a fine building, situated on the creek near the Manus bridge.
Milk is supplied by a number of dairy farms, each milking a large number of cows at present. And one of the dairies has of late been installed with milking machines, which are said to be a vast improvement on the old style of milking.— D. HASH. (3)

The Children’s Page in the Albury Banner and Wodonga Express is a source of rich local information like no other, and a great asset to researchers of the greater Albury region which includes both Bethanga and Manus.  The letters were actually written in school under the auspices of a teacher, but the content was something of relevance to the child.  This letter manages to describe perfectly the situation at Manus just before the arrival of the Morey family.

Main street of Tumbarumba Dec 2014 about 7AM

Manus Station was established by Robert McMicking in 1856 and even in the 1970s the McMickings were remembered as important people in Manus.  On each visit to the district we went to see the McMicking graves.  I assumed as a young child that they were related, but they are not. However, their influence on my family was so great that the next generation took on as much reverence for them as their forebears had felt.

In about 1900 Robert McMicking suffered a serious illness which left him invalided. Unable to focus on the labour-intensive sheep industry, he built a cheese factory and introduced dairy share-farming to ensure a supply of milk.   The new operation required a large number of new workers.  The call must have gone out somehow, because William Morey and his family took heed, as did several other farm workers from the Albury region.

At the age of 20 Stella lived at Manus and worked as a dairy maid.  I don’t recall her talking of the milking machines, but she spoke of going to work in a stiff morning frost just before dawn.  Here she met Burley Peard, a farm worker from Albury who travelled regularly to Manus on his bicycle to work on the property.  Burley was 28, a quiet man, a very hard worker who made a success of almost everything he touched.  He probably came to Manus first to observe either the cheese factory or the milking machines.  Stella had something to do with his decision to remain.

It was less than a year after they met that Robert McMicking passed away, and a suggestion was made that Manus be selected for a ‘closer settlement scheme’, which meant opening up land in 100 acre lots rather than the expansive stations of the 19th century.

Burley Peard and Stella Morey were married on the 18th November 1908 in the little church of St Judes at Tumbarumba.  They settled on land at Manus and called their property ‘Toronto’.

The eight share-farming families who moved to Manus in circa 1908 have remained very close to this very day.  Most if not all of them are now connected by marriage.  They came from very different places but forged a permanent community which has seen a little village grow up in Manus, and also watched that village disappear.  William and Fanny’s house stood for decades after their demise, unoccupied, but has finally fallen down.  Burley and Stella’s house still stands but in a partially dismantled state.

Home of Burleton and Stella Peard 2014 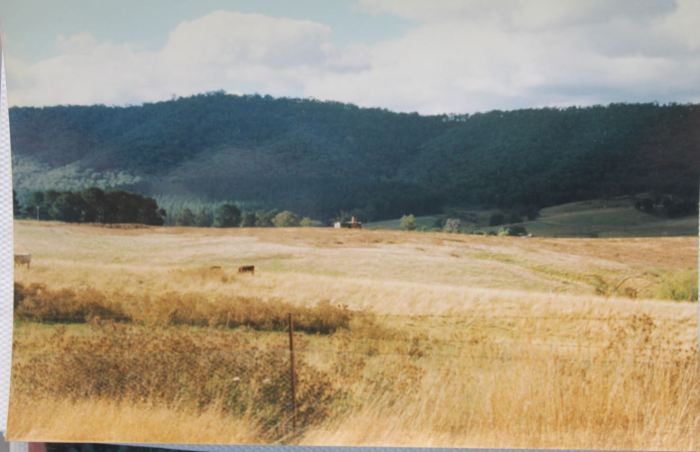 Only two children were born to Burley and Stella, one of whom was my grandmother.  They lived at Toronto from 1908 until Burley’s death in 1974, after which Stella moved in with her son and daughter in law in a neighbouring property.

Stella passed away on 6th July 1984 in Mannus, and is buried in the Tumbarumba Cemetery.

Burleton and Stella’s headstone at Tumbarumba