Back to Adventurous Alice Part Two – Journey to Australia 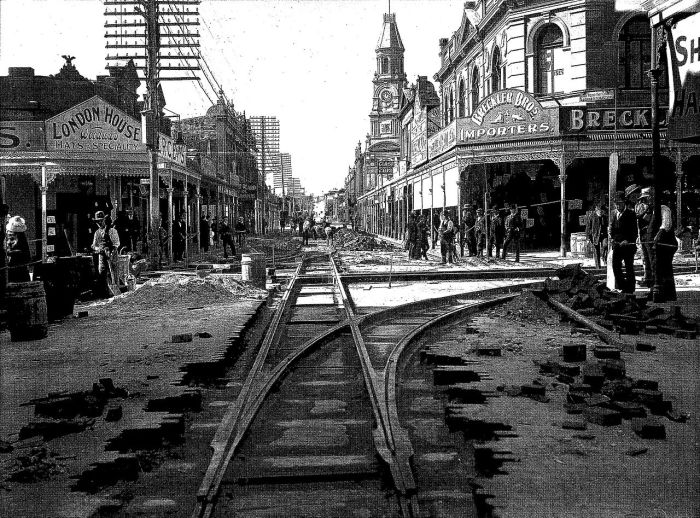 Fremantle 1905. 9 years after Alice arrived but many of the buildings would have been there already. Circa 1905. Public Domain. Digital scan of “Laying tramlines”, RWAHS R1770 in the photographic collection of the Royal Western Australian Historical Society via https://lt.wikipedia.org/wiki/Vaizdas:Laying_tramlines.jpg

Alice and her sister Florrie reached Fremantle with 47 other young women on 22 May 1896.  They disembarked somewhere along Fremantle’s famous mile-long pier and walked in to the shore.  Most of the women were wearing donated clothes from the residents of St Helena (details in previous post)  and only one of them had luggage.  Many of them had lost treasured family heirlooms.  Having left England in a cyclone and survived a ship’s fire, they must all have wondered what was in store for them in their new home.  The old idea that misfortunes come in threes might have been forefront of their minds.

Probably not in the forefront of Alice’s mind though.  She doesn’t show in the records as being superstitious and is remembered in the family as a very level headed and intelligent woman.  Alice’s objective was financial security.  She came from an overcrowded but hardworking home but the number of children would have made life difficult.  It’s just a guess, but she probably did not want to live the hard working life that must have run her mother into the ground. 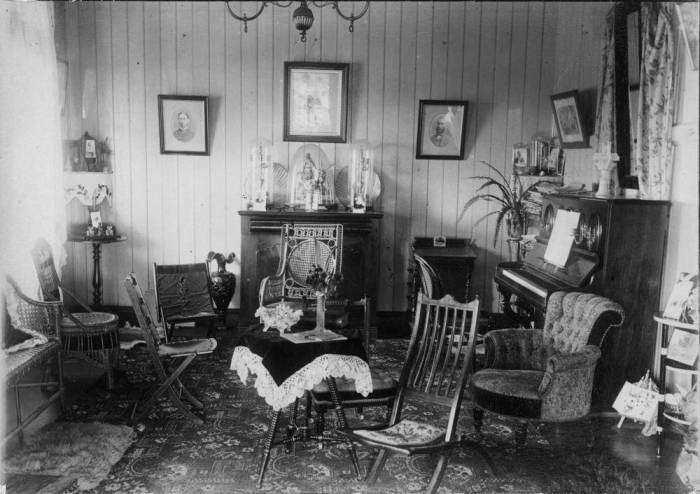 An approximation of the indoor world of Alice Head. An 1890s Parlour. This particular room was in Queensland but the furniture type and arrangement was equally accurate for Western Australia. Ref: State Library of Queensland

The women stayed in accommodation operated by the United British Women’s Emigration Society. An ambiguous notice in the Southern Times suggests that they traveled by train to Perth and were placed in a government owned boarding house there while they waited for employment.(1)

Either on the first or second day, they were also met with a list of employers who were seeking the service of a domestic servant.  These employers had been vetted to some degree by the UBWES workers, who had already weeded out the less reputable offers.  Under these circumstances the women were probably encouraged to meet with the potential employers on that first day and accept the first reasonable offer.

This year was a little different to the others. Miss Monk needed to purchase new clothing for her charges, which expense is listed in the quarterly accounts of October 1896. 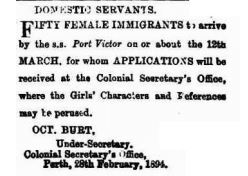 Advertisement from two years before Alice’s journey.  No doubt the same system applied. (2)

One day, I hope to know the fates of each girl who made this voyage.  I’ve located many of them in the marriage records over the following ten years, but not all.  Quite a few of them probably hoped to marry a wealthy gold tycoon, after wild tales of unparalleled wealth in Australia were reaching England.  Others probably just sought a decent, hardworking husband to help them make a go of the world.

Women’s emigrant ships were known in Australia as ‘bride ships’, and even the United British Women’s Emigration Society annual accounts refers to the large number of emigrating women who find husbands in their new home.   No information has come down in the family regarding Alice’s views about marriage.  Whether this was a year long adventure expected to culminate in a return to England or a lifetime move is also not known.

Two of the women – 23 year old Maud Kirton and 19 year old Lily Downie – were married the year of arrival, failing to see out their terms of passage.  Each of them were married in Fremantle and must have met their future husbands very soon after arrival.

All that I definitely known of the others is that they found employment quickly. 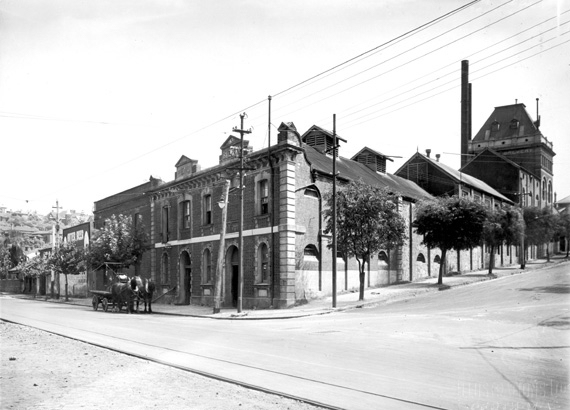 Alice and Florrie  may have taken work around Fremantle or Perth for that first year with an employer duly approved by the UBWES team. They both vanish from the records for a short time.  They were obliged to work for one year and no doubt Alice did this with her eyes and ears wide open, taking in the opportunities and pitfalls of life in the colony.

Some of the women (for example 19 year old Lizzie Allcock) ended up employed as laundresses for the Western Australia Public Service.  It was secure work and no doubt decent pay, but if Alice found herself in this position she might have worried about parallels with her mother’s life.

One thing she must have heard was that there was money to be made in the hotels. Respectable barkeepers were in great demand.  It looks like a tough job from this distance, without any of the modern health and safety regulations.  It would have brought a girl into contact with dangerous men, smoke filled rooms and probably the sights and behaviours of genuine hardship.  Hotels were generally boarding houses too, so duties would have involved maid work and cleaning, perhaps cooking, perhaps waitressing.

The UBWES may not have been affiliated officially with the Women’s Temperance League, but the two groups shared many common philosophies. It is very likely that no emigrant under their scheme was presented with bar work as an employment option.  In 1896 there was talk in Perth of campaigning for a law to forbid single women from working in licensed premises.

But despite any conjectures, what Alice actually did for work in that first year is not known.  By May 1897 a lot of her former travelling companions were getting married in Fremantle, Claremont and Perth.

Obviously Alice didn’t have enough excitement in her life.  Probably in company with their friends,  she and Florrie caught a train to Kalgoorlie, a journey of about 700km. 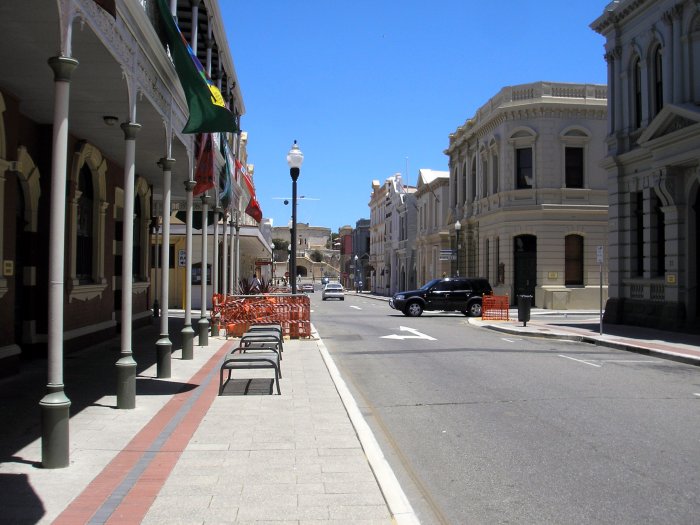